TAX DEADLINES WITHIN THE STATE OF ALARM IN SPAIN 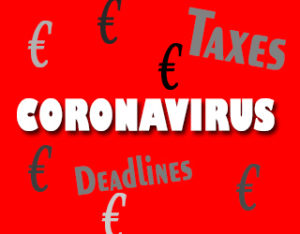 Due to the actual crisis that has been declared in the whole world by the World Health Organization because of the Coronavirus (also known as Covid-19), almost every country has put into force different measures.

*This document has been written according to the law and Decrees in force until 4th April 2020.

In Spain, the 14th March 2020, the government declared the “state of alarm” (regulated in Art. 116.1 of the Spanish constitution and the organic law 4/1981), for 15 days, (until the 29th March), through the Real Decree 463/2020, closing museums, monuments, restaurants and almost every business open to the public. Nevertheless, concerning the increase of the infections, the state of alarm has been extended for another 15 days until the 12th April 2020, after the approval of the Parliament ( Congreso de los Diputados, Decree 11/2020), and pending for another extension until the 26th April.

The main goal of these decrees is to prohibit free movement of people in order to prevent further increase of infection among the Spanish population. Nevertheless, all these measures have economical, fiscal and, of course, social consequences.

Extension of the payment dates for self-employed and small entrepreneurs (PYME) (Deferral and split payments).

What happens with the procedures communicated as of March 14?

For all the aforementioned procedures communicated as of that date, they are extended until May 20 of 2020 (unless the one granted by another tax rule is higher).

For example: if a settlement for the payment of a tax debt was notified on March 19, in normal cases you would have to pay it no later than May 5, however, with this decree, payment can be deferred until May 20.

However, in any of the above assumptions, if the taxpayer complied with the requirement, paid the tax debt or presented allegations despite the deferment granted, they will be understood to have been carried out for all purposes, procedure completed.

What happens with self-assessments such as the payment of Property Transfer Tax in the sale of a home?

When a person buys a home in Andalusia, they have 30 days to pay the Property Transfer Tax, which is currently 8% of the purchase price. The payment of the same is done through a self-assessment. In other words, the buyer or his/her representative prepares this tax model and presents it voluntarily for payment within that period.

The decree regarding the state of Alarm does not include self-assessments as deferrable, according to Royal Decree 465/2020, of 17 March, amending Royal Decree 463/2020 of 14 March, declaring a state of alarm, so for example, neither the quarterly settlements of VAT nor personal income tax (models 130 and 303) are postponed and maintains their deadline for April 20 for the third quarter.

What happens during the state of alarm with the legal term of actions that tax authorities can exercise against someone and the deadlines for filing appeals?

Royal Decree 11/2020 establishes that the period from March 14 to April 30, will not count for the purposes of prescription in the actions that the tax administration may exercise against the administered.

There would neither be a deadline for the expiration of the procedures initiated by the administration.

On the other hand, the deadlines for the filing of administrative economic appeals against tax acts or in the economic-administrative procedures not notified before March 14, 2020, do not start until after April 30, 2020.

These deadlines do not vary, meaning that all non-residents in Spain receiving an income from rentals of a property here in Spain must declare said profit quarterly within the corresponding period.